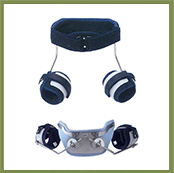 S.W.A.S.H Brace
Patients with Cerebral Palsy often present with one or more of the following problems: 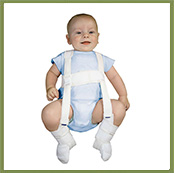 Pavlik Harness
The Pavlik harness is a fabric brace designed to gently position a baby’s hips so they are aligned in the joint, and to keep the hip joint secure. It is typically used to treat babies from birth to six months of age who suffer from developmental hip dysplasia. This condition is characterised by either one or both of a baby’s hips being underdeveloped.

By positioning a baby’s hips in a Pavlik harness, it will keep the hip joint aligned and stable, this will assist with normal growth and development of the hip joint. It is recommended that the baby wear the brace full-time for 6-12 weeks. Some doctors allow the Pavlik harness to be removed for bathing and, as long as the legs are kept in a similar position as in the brace. Diaper changes can be done without removing the brace. Babies are checked every week to ensure that the hips are still in the correct position. 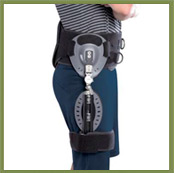 Hip Orthoses would also be prescribed in the event of developmental problems in children, which is commonly referred to as congenital dysplasia of the hips. With this condition the hip is prone to dislocation because the ball of the femur is not properly contained in the socket section of the hip. Placing the child in a brace for a few months would give the joint enough time to develop properly and should prevent future dislocations.

Hip orthoses, like most orthoses, can be placed in to two categories: Supportive and Corrective. In adults it would be supportive because they are skeletally mature, which means the there is no more bony growth taking place. Children on the other had are still growing, thus it is possible to correct some conditions with a temporary brace.

Hip orthoses can also form part of a larger orthosis that include support of the knee as well as the ankle and foot. These are known as Hip-Knee-Ankle-Foot Orthoses (HKAFOs) and they are usually prescribed when a patient struggles with muscle weakness and is not able to fully control one or both their legs. The function of a HKAFO is to stabilise the joints of the leg and to assist the patient to walk with more ease.