Cranial remolding orthosis are frequently prescribed and are an effective treatment modality for infants who have an abnormal head shape/ skull deformity.

Skull deformities can be described as asymmetry in the shape, cranial vault or height of the baby’s skull or a disproportional relationship of the width to the length of the skull with accompanying abnormal features. Most skull deformities resolve in about 6 weeks after birth.

A newborn’s skull is highly malleable and rapidly expanding./ Any restrictive or constructive forces applied to a baby’s head can result in dramatic distortions. These deformational head shapes vary in severity and are classified as being mild, moderate or severe according to internationally accepted scales and treatment guidelines. We make use of state-of-the-art 3-dimentional scanning technology to accurately measure the dimensions of the cranium, diagnose and classify the severity of the deformity.
The infant skull doubles in size by 6 months of age and doubles again by 2 years of age. The fastest brain growth occurs between birth and 8 months of age. The best time to treat any skull deformities is between 4 – 6 months of age. Treatment of the skull deformities can still be done after 8 months of age, treatment will just be a little longer.

Causes of skull deformities include prenatal constraints/ multiple births, delivery process or method, premature birth, sleeping positions, lack of tummy time and torticollis to name a few. These skull deformities are not only cosmetic as the type and severity of the deformity can lead to developmental delays. Depending on the type and severity of the cranial deformity the babies hearing, vision, teeth and jaw can also be affected.

Plagiocephaly is the most common skull deformity with a 68% occurrence in males. It is also called “flat-head syndrome” where the primary deformity is posterior flattening of the skull with collateral forehead flattening. The position of the ears and facial features can also be affected. The dotted line in the picture represents a normal skull shape.

Brachycephaly is a disruption in proportion between the normal relationship of cranial width to length resulting from external forces to the central occipital region. This is the second most common skull shape deformity.

With brachycephaly the skull is short and wide with unilateral or bilateral posterior flattening. There will be an increase in the skull height and a decrease in the skull length. The child’s face will be wide and round with minimal impact on the ears. The dotted line in the picture represents a normal skull shape.

Schaphocephaly is when the width of the skull is decreased and the length is increased. This is known as a disproportional head shape where the sides of the head is flattened. This is not a very common head shape but does still occur. The dotted line in the picture represents a normal skull shape.

Malcolm Freedman and Charne Schoeman have successfully completed the STARband training courses are accredited by Orthomerica. We work closely with the Orthomerica STARband team to ensure the best possible outcome for your baby. 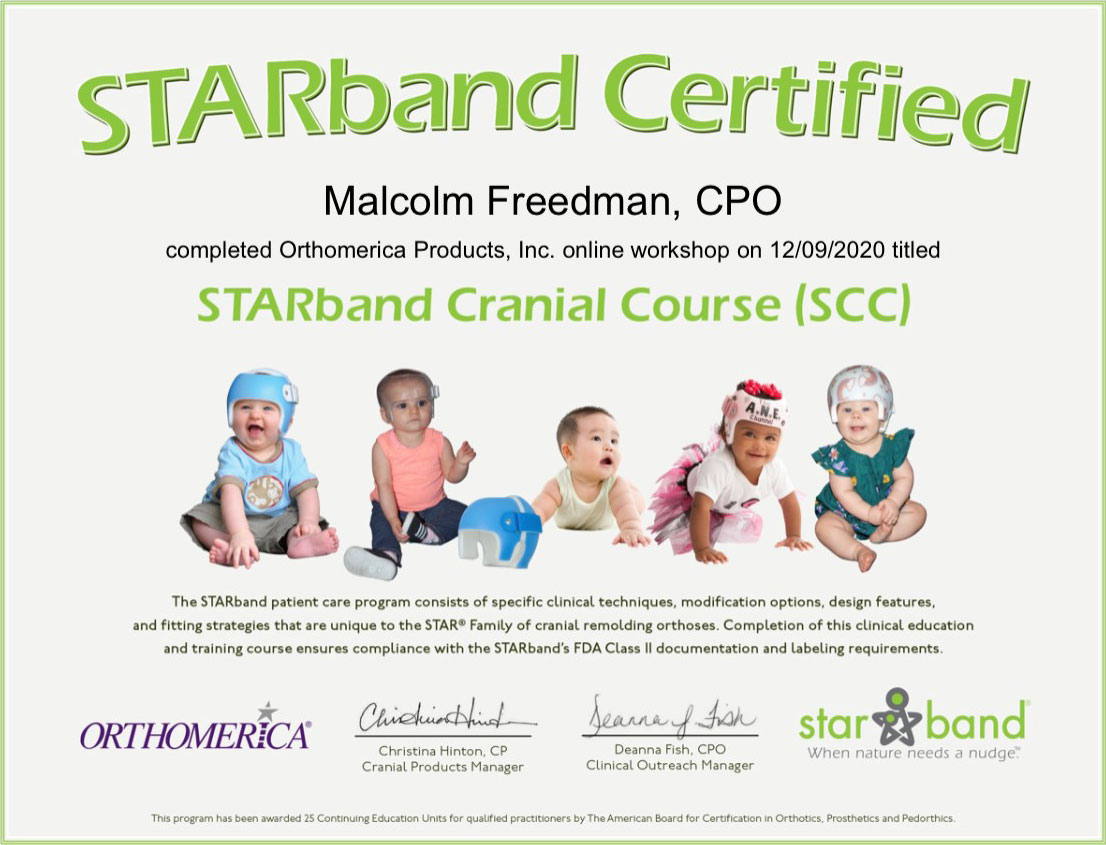 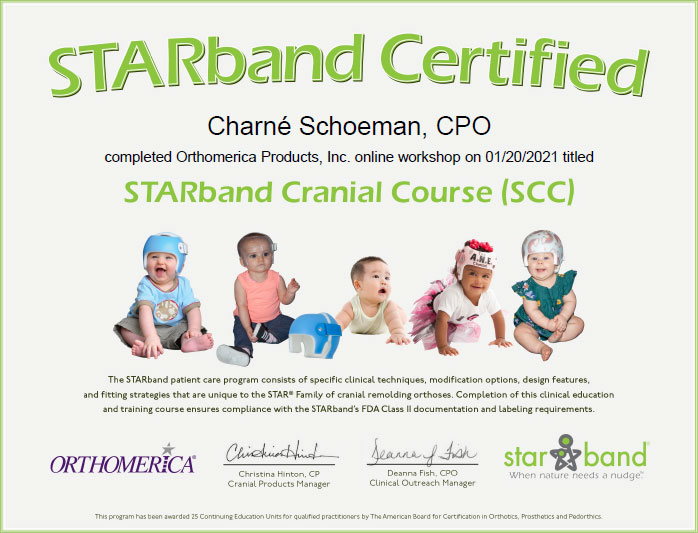 What can you expect during the cranial treatment plan?

Malcolm or Charne will do a thorough evaluation of your child, gather all the necessary medical history, and take clinical photographs/ scans/ measurements needed to outline the full cranial care program. 3D scans of the child’s head will be done with a FDA approved SmartSoc data acquisition system – the most accurate hand-held scanner available for cranial applications. 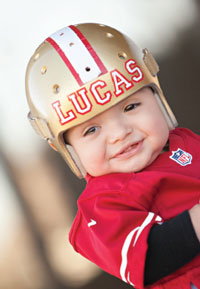 With the initial CRO fitting we will make any necessary adjustments and modifications to achieve the best possible fit.   Follow-up visits will be scheduled depending on the patient needs. During follow-up visits we will assess the skin condition and fit of the CRO.   We will continuously make the needed adjustments to maintain optimal fit and comfort.   Additional appointments can also be made to address any concerns or questions from the parents/ family/ caregiver.

The length of the cranial care program will be dependent on a variety of factors.   The best age to start treating a cranial deformity is four to six months as it captures the greatest natural growth of the infant’s skull.   This in turn decreases the wearing time of the orthosis.   In most cases the wearing time is three to four months and correction are obtained in just one CRO.   In older infants’ correction can also be achieved but wearing time will be longer before full correction is achieved.